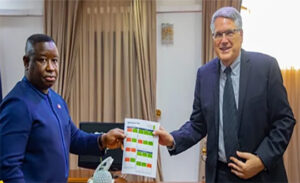 President Bio with US Ambassador David Reimer at State House

The traditional presence of the American Ambassador and the British High Commissioner on the ground is supposed to provide an atmosphere of moral guarantee in the small West African State of Sierra Leone. They are supposed to represent the two most powerful and influential western countries in the world. Their job is to report exactly how the country is run and managed by those elected into government to ensure American and British Tax payers money which provides budgetary support and development Assistance,  is well spent and do not fall in the hands of thieves like the notorious state embezzler who passes for President, Julius Maada Bio and his wife, the socialite first lady who spends most of her time on social media with her son parading their loot from state wealth.

Both these diplomats should be recalled with immediate effect and replaced, as they spend their time securing photo opportunities with the buffoon president and litter their official social media accounts with such photos maybe to showcase the fact that they are performing their official duties impeccably. But this is far from reality. Despite numerous publications by the Africanist Press with substantiated claims and empirical evidence pointing to the systematic looting of the country’s wealth by the President and his cabal coupled with astonishing reports of despicable human rights abuses by President Julius Maada Bio (with an opposition party leader still languishing in detention with no charges and with a serious life-threatening medical condition and needing urgent treatment), none of these diplomats have made any statement condemning such acts or confronted state actors demanding answers. In my view, they are complicit and equally culpable of the heinous crimes committed under their very nose and the vandalising of the state resources by someone they are responsible of installing as president through regime change.

Newstime Africa is calling on their respective governments to recall them immediately as they are not fit for purpose and represent nothing but the worst of diplomatic assignments ever made to the West African State. When you are appointed as Ambassador or High Commissioner to a country like Sierra Leone from a country like the United States or the United Kingdom, you have a moral obligation to hold the host country accountable because of the huge amount of tax payers money being poured into the country as part of the development assistance policies that form an integral part of your country’s foreign policy agenda.

When a President authorises the forgery of hotel receipts for trips abroad and suspends the country’s Auditor-General because of her findings into malfeasance in government and appoints a reckless  Anti-Corruption Commissioner who spends time going after opposition party leaders instead of investigating the looting of state resources then you know the electorate has got it wrong and the country is in trouble. When significant aspects of the Audit Report was doctored and crucial details omitted on the orders of the Head of State then you know a country is on its knees. When a president can lease his country’s port terminals for 25 years to another country without getting the approval of parliament or notifying the electorate then you know the state institutions are morally bankrupt. When funds meant to stem the spread of Covid are diverted to personal bank accounts belonging to state officials then you know the country’s population is at risk.

When a sitting Head of State deploys personnel made up of a huge percentage of the ruling party (SLPP) members to run the country’s electoral Commission, then you know he is desperate to rig the upcoming elections in 2023.  When the Head of State and his wife surreptitiously withdraw over 3 million dollars from state coffers to cover travel expenses in 2020 alone then you know they are oblivious of what it takes to govern a country that is stricken with abject poverty. When the name of a sitting Head of State is Julius Maada Bio, and he is a notorious human rights abuser, known to sell his country’s passports to corrupt Chinese businessmen, a certified coup plotter, and state resources embezzler, and accused of forgery, regime change becomes inevitable.

Nigeria’s next President must unite Nigerians across party, religious and ethnic faultlines. Pius Utomi Ekpei/AFP via Getty Images Al Chukwuma Okoli, Federal University Lafia Nigerians will soon determine who their next president will be in a general...