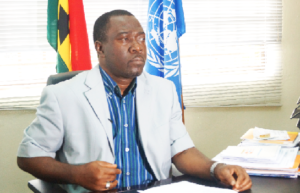 In a move far from the traditional approach to diplomacy, the United Nations Representative in Sierra Leone, Dr. Babatunde Ahonsi, has said in a statement that the government of Sierra Leone lacks the delicacy and skill to run the country. In a damning verdict on how things are conducted in the country, the UN head of country held no punches back as he tore through the mundane manner in which the government administers different aspects of its policies. He was blunt in his attack as he delivered his new year message entitled- 2022 – A Year to Put Sierra Leone First – he said  Sierra Leone was not in line with the sustainable development track. Ahonsi expressed concern over the ineffective vaccination drive over COVID – 19 as well as their unprincipled adherence to the preventive protocols established by the WHO. This is a rare attack by any UN official in the country and shows the frustration endured by the UN Rep. in a country that he has done so well in securing direct assistance for only to be embarrassed by the disappointing setbacks caused by inefficiency at the highest level of government.

Dr. Ahonsi called for the national Covid-19 response to be significantly re-engineered around a sustained ‘Do-It-All’ strategy, suggesting that the government does not fully understand the seriousness of the pandemic. In his remarks, he said, “For now, therefore, rather than talk about post-Covid recovery, the focus should be on containing Covid-19 transmission and sustaining inclusive and nature-positive economic growth in the course of doing so.” referring to how the government had embarked on a propaganda mission to deliberately misinform the populace with unrealistic targets – he further stated that “In addition, dealing with the impact of Covid-19 offers a resetting opportunity for real transformation in economic policy responses towards protecting and improving livelihoods for the teeming population of young people and women in the informal sector”

Without mincing his words the UN head said, “…the long-standing weaknesses in the fundamentals of the national economy are likely to be exacerbated in 2022. The less-than-ideal trends in per capita income, consumer price inflation, foreign direct investment, current account deficit, and the debt-to-GDP ratio could potentially worsen. …” Reiterating on the government’s wasteful spending and pillage of the country’s coffers, Dr. Ahonsi said, “…Government may have no choice but to institute severe austerity measures and to do a lot more to eliminate inefficiencies and gaps in the allocation and management of public finances”.

He then went on to admonish authorities – “All hands must be on deck to ensure the ring-fencing of funding for key priorities around education, livelihoods protection, and health which are key to ensuring social stability and speedy return to the path of economic recovery.” Here he was suggesting that pilfering of state funds must stop and funds must be allocated to key priority areas.

Referring to the current political climate, the UN head of country said in a blistering remark, “We saw an unmistakable rise in political tensions in the land and louder expressions of anxieties about the democratic health of the country. These tendencies would need to be reversed in 2022 *to lay the foundation for an enabling environment for peaceful and credible elections in 2023.” Dr. Ahonsi was establishing that the International community was aware of the regime’s inability to harness democratic harmony and that no interference in the democratic process will be tolerated. In this respect, the UN Head of country said – “The country needs more than ever before to return to the path of inclusive politics that builds bridges across ethnic, regional, gender, generational, and disability status divides”.

He then gave this assurance about the international Community’s resolve – “The UN will also work with key stakeholders to directly support efforts to foster peaceful, credible, and inclusive elections in 2023.”

This is the clearest indication yet that the UN is working closely with its international partners to ensure that the coming elections in 2023 will be free and fair and free from any kind of vote-rigging, political intimidation of opponents, and interference. Regime change seems to be on the cards as well if one carefully studies the words of the UN country rep. as he spelled out frustration and disappointment at the Bio-led administration. This statement also shows the true character of a man who does not compromise on the ideals of the UN and his own personal moral values – a man with a bright future at the UN as he stands out as a real world-class diplomat. And I must say, Dr. Babatunde Ahonsi is a true friend of Sierra Leone.

One thought on “Dr. Babatunde Ahonsi, the UN Resident Rep. in Sierra Leone suggests the government lacks the delicacy and skill to run the country”

UK work visa for elite graduates is exclusive and based on f...

The UK’s high potential individual visa demonstrates short-sightedness about the experience, insights and skills that graduates from the global South could bring to the UK. Shutterstock Orla Quinlan, Rhodes University The UK government’s announcement...