The interesting thing is, the former Minister’s tabloid was quoting the Mayor of Freetown, Yvonne Aki-Sawyer who may never have been in a position to be fully cognisant of corruption in government because she had never served in any capacity in government until she became mayor of Freetown. The newspaper reported that Sawyer made the comments on a post she wrote on social media.

To use the front page of your rag-tag newspaper to attack a government you were part of and even accused of corruption at one time as Minister of state is simply hypocritical. I am in no way defending the Ernest Bai Koroma government as i am owed huge amounts of money still unpaid by the former president after my salary along with the salaries of many other political appointees were deducted without any explanation to fund the party’s 2018 election campaign. But i am firmly against blatant hypocrisy on the part of Blyden who in the name of trying to fight for relevance in the APC party has attempted to drag the party through several court proceedings referring to her camouflaged ploys as Intra-Party differences, but having all the hallmarks of high-office political ambition with a smear media campaign at the very heart.

In the usual way, Blyden even went at length to define the word Kleptocracy in her article, which was more of an insult to her readers who she has always tried to educate as she know she only appeals to a certain class of the electorate, who may be academically challenged as the pen-pusher herself.
Blyden who as Minister was sacked for publicly using profanity and obscene languages on her deputy and for misconduct in public office, does not have the credibility to be pointing fingers at her former boss who she once told me she has a lot of respect for because he always remembers her birthday and sends birthday wishes every year to her phone.

Blyden had been sacked twice, first as Special Executive assistant to the President but was later re-instated as Minister of Social Welfare after the timely intervention of APC secretary-General Osman Yansaneh who was seeking media protection and reputation enhancement favours from her. It was reported that Yansaneh had to prostrate in front of Ernest Bai Koroma to plead for Blyden to be given a ministerial appointment.
Blyden is definitely right to say the APC government of Ernest Bai Koroma was kleptocratic and for many reasons so, but using her front pages to make that case on a government that she was part of, was a serious error of judgement. 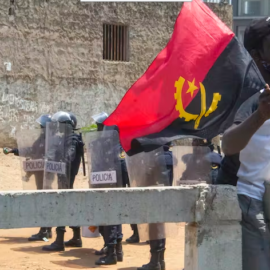